NOTE: This was originally posted on a different blogging platform on April 8, 2016

The original Game Genie is a cheat device for the Nintendo Entertainment System that alters game data in real-time. Users must “program” the Game Genie to perform certain actions. They do this by entering codes into the interface that appears before the game they wish to alter. 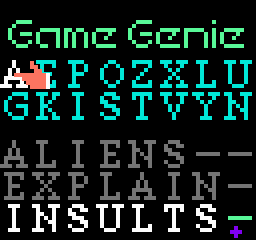 Since the interface runs on the NES, it is also written in 6502 assembly, the programming language of the Nintendo Entertainment System.

I undertook a disassembly of the Game Genie ROM to see just how the creators went about programming their infamous cheat device.

To see the full code explained here, check out the repo: https://github.com/kevinselwyn/game-genie-disassembly

The Basics of the Assembly

The ROM is made up of bytes of 6502 machine code that can also be represented in assembly language. Machine code like this:

Can be written in assembly as:

33 bytes of machine code translate into 17 instructions of assembly code, the latter being easier on the eyes, more concise, and simpler to debug.

Together, all these instructions make up the ROM and are what I will be poring over.

The Anatomy of the ROM

The Game Genie ROM is 24592 bytes and breaks down as follows:

The Header is 16 bytes of data that contains information useful to emulators, so will be (almost) ignored in the disassembly process.

The PRG ROM is the actual game code. On the Game Genie, the core code is repeated 4 times. So the total size is 16384 bytes, but we are only concerned with 1/4 of that.

The CHR ROM is the character data that contains graphics tiles that can be displayed in the background and in sprites.

The heavy lifter in the process of translating machine code into assembly code was py65, a 6502 simulator written in Python. It comes with a utility called py65mon, an interactive monitor that can be used to load a ROM and disassemble it.

First we load it in at offset 0xBFF0. The PRG ROM starts at offset 0x10, so we account for this by loading it in at 0xC000 - 0x10. The CHR ROM is cropped off as a result, but is unneeded at this point.

From there, it’s easy as:

2157 lines later, and our disassembly is complete! Told you it would be easy.

The CHR ROM was recreated by looking at the PPU (Picture Processing Unit) data in an emulator. The graphics are extremely simple:

This image was converted back into CHR data using a utility I wrote: img2chr.

I’m using a (slightly modified) version of nesasm to reassemble the ROM to see if we end up back at the same data as the source ROM.

nesasm lets you include external source files or binary data, allowing developers to separate components of a project for greater abstraction and readability.

Here is our project structure:

Other files are included build build purposes, but these are the files we will break the ROM into for reassembly.

To make things easier to read/understand, I replaced all zero-page variables ($00-$FF) with variable names (variable_00-variable_FF). This will make it easier to swap out the ambiguous variable names later when I find out what they do or what data they hold.

Next, I chunked the code according to a few constraints. A new block was formed if:

Let’s look at a subroutine chunk:

Let’s clean it up and add a label before offset $F022 for the BNE (Branch on Not Equal to zero) instructions:

Notice that for the first 6 lines, the instructions look normal. After that, things start to get weird. A lot of successive ORA (Logical OR with Accumulator) instructions are not normal, and neither are the ??? instructions. Also, we can notice a sort of pattern in the 8 remaining (incorrectly disassembled) instructions. The instructions should look like:

A great starting point in creating labels that have some context is by looking at the vectors in the ROM.

When the ROM boots, the CPU looks at these vectors (mainly the RESET vector) to tell it which address to jump to in the ROM at the start of execution.

The NMI vector is the address the CPU jumps to during every Non-Maskable Interrupt (usually run once every frame).

The IRQ vector is unused in this ROM. It is usually set to $0000 if unused, but is set to $FFFF in this case.

At the end of the Game Genie ROM, we have these disassembled instructions:

If we weren’t savvy to the vector locations to begin with, the strange “instructions” here would raise a red flag. Disassembled correctly:

It’s worth noting that vectors (and many other 16-bit addresses are stored backwards. Meaning that the high byte appears second and the low byte first.

Much easier to read when following jumps in the source.

By default, all zero-page variables ($00-$FF) were named variable_00-variable_FF. The ones where I could derive context were changed. Note the following snippet:

Based on what we know about $2005, the scroll register, it needs to be written to twice: once for the X scroll position and one more for the Y scroll position. It stands to reason that the variables right before each write to $2005 correspond to 2 variables that store those positions.

This is the entirety gamegenie.asm the file that will compile into the final ROM:

The first 4 lines are iNES directives that set values in the header used for emulators:

How much did you learn?

Not much, really. I learned a lot about how to successfully disassemble a NES ROM, but precious little about what the code is actually doing. I managed to catch a glimmer of context at the beginning of the ROM (startup, config, etc.), but after that, it gets pretty esoteric.

Why did you do this?

I’ve always wanted to disassemble a NES ROM. The file size is daunting, but the Game Genie ROM is small and on top of that, the main code is just repeated a few times to fill out the size. It was not very time intensive, so it’s a good starting point for larger ROMs.

What was the most interesting takeaway?

I didn’t realize until I was almost done that, essentially, the Game Genie was an unlicensed NES game; that is, a game not made with Nintendo’s blessing. It’s amazing to see snippets of code that I’ve seen in other licensed NES games, as well as my own NES programming projects where the conventions were arrived at naturally.

Check out the full code in the repo here: https://github.com/kevinselwyn/game-genie-disassembly